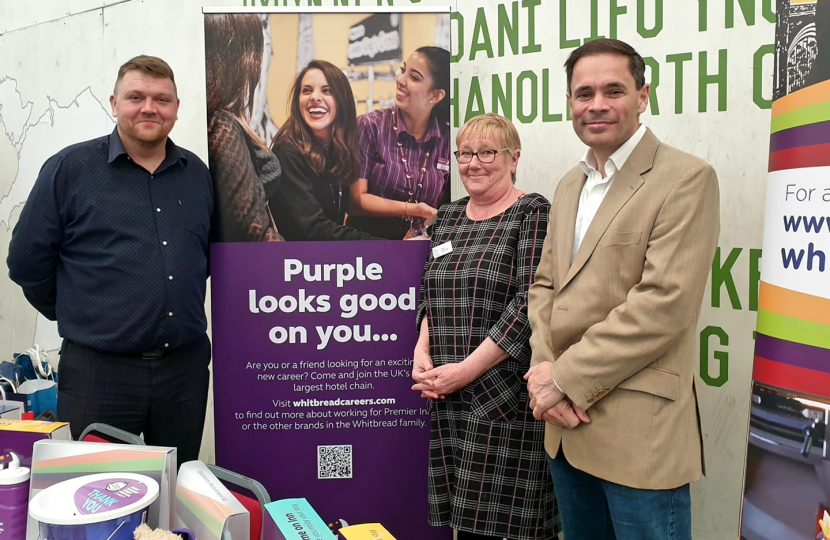 I spent a fantastic afternoon today at Eirias Park at the Conwy Job Expo with Lynne and Sam from the Llandudno Jobcentre.

Working with Conwy Council they organised a wide range of employers, support providers and charitable and voluntary groups (including Crest from Llandudno Junction) to attend. Anyone was welcome to come in and learn about jobs and development here in Conwy.

One of the employers there was Premier Inn (a part of the Whitbread Group).

Paul Moore manages the new Tudno Castle Hotel that Mostyn Estates has refurbished in the centre of Llandudno.

He was telling me he used to visit Llandudno as a child and stay at the Tudno Castle. He always had a dream of coming back one day and buying it - instead he finds himself the manager!

He attributes his success to Rhian Gwyndaf from the Jobcentre who helped him get started in work - she is there with him in the photo.

He explained how her support and persistence with him changed his life - so he is now committed to doing the same for others. All but one of the fifty staff at the hotel are local, many recruited through the Llandudno Jobcentre - and those who need a bit more help get it.

The Tudno Castle Premier Inn will be taking bookings from late July but this is a fantastic story of lives being changed and opportunities being opened up with the right support.