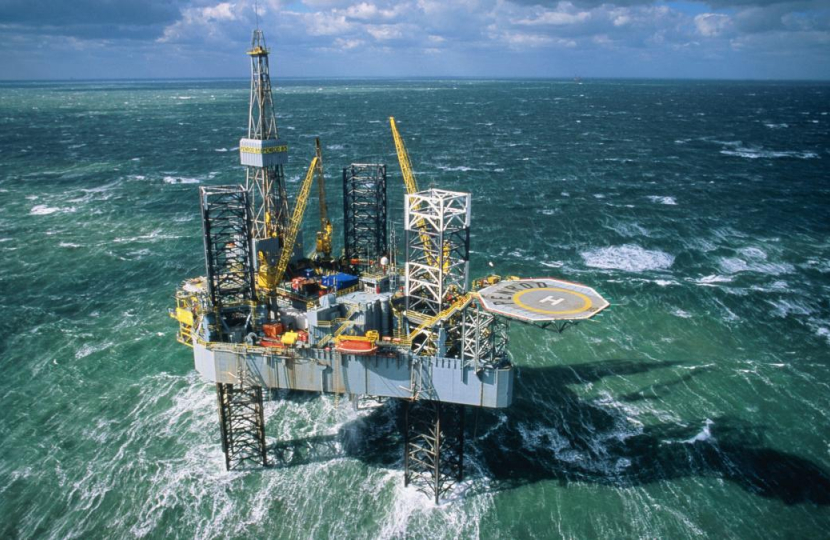 The rising cost of living and especially rising household energy bills, are a real concern right now for many of us in Aberconwy (May 2022). At the same time, energy companies like BP, have declared record profits.

On the final day of the Queen’s Speech Debate, Labour tabled an amendment to introduce a windfall tax on North Sea oil and gas profits.

I am sympathetic to the problems people face to pay the bills – I have been there myself. I have visited foodbanks in Aberconwy in recent weeks. I have spoken with residents about the challenges they face.

However, I don’t think a windfall tax was the right answer to those problems just now so I voted against the amendment. Here are five simple reasons.

First, the Queen’s Speech sets out the Government’s legislative programme for the year, so this is not the right place for such an amendment.

Amendments are often tabled for debate but are rejected by all sitting governments of all parties as a matter of precedent. This is a debate about a legislative programme, not the specific bills within it. It is for the Chancellor to introduce fiscal measures in the annual budget or emergency responses, such as for the COVID pandemic.

If a tax is intended for a one-off reason – for example to support the most vulnerable – then it has to be fit for purpose. Labour have claimed it will raise £1.3 billion, then £2 billion and most recently £3 billion. Even on a simple analysis of oil and gas tax revenues, the 10 per cent windfall tax proposed by Labour would likely raise much less than they claim.

Third, the amendment was unclear on how money raised would be used or how much was needed.

If we use the figures above, a windfall tax of £1.3 billion would raise about £3.60 per household per month – not even £50 in a year – which will not address the rise in energy bills and much less than the support the government has already put in place. That means, to deliver the promised support for households either other taxes would have to rise, cuts would have to be made to public services elsewhere, or the government would have to borrow more money to fund the handouts.

None of this is impossible – it is just poorly thought out, which does not give any confidence that it would achieve what it is intended to do.

Fourth, while many energy companies, and especially the larger companies, are currently making record profits, they also suffer record losses.

Demand for energy crashed as economies around the world locked down. In the first year of the pandemic alone Shell reported a loss of £16 billion and BP £4.5 billion. Neither company asked for UK Government financial support throughout the pandemic.

A one size fits all windfall tax on energy company profits would also damage those not making record profits who are only now slowly recovering from the pandemic.

And that is just the pandemic. Many companies have been forced to endure significant write downs due to the invasion of Ukraine - write downs which are not yet reflected in profits. BP, for example, has had to absorb a £20 billion pre-tax accounting charge related to its decision to exit its Russia holdings, including its stake in government-controlled oil producer Rosneft. This is by far the biggest financial hit tallied by companies pulling back from the country after its invasion of Ukraine, but other companies have also had to absorb significant accounting charges.

The UK’s oil and gas industry will pay £7.8 billion in taxes this year – a significant boost for the UK Treasury and roughly equal to 1% of the nation’s entire tax revenue. The £7.8bn tax payments for 2022-23, predicted by the Office for Budget Responsibility, are equivalent to about £279 per UK household.

They also represent a 20-fold increase on 2020-21. Back then, plummeting demand and prices because of the pandemic saw most energy companies make multi-billion-pound losses, contributing to a UK tax take of just £400m from the UK offshore oil and gas sector. The recent surge in global energy prices has reversed that trend. The existing 40% tax rate imposed on the UK’s offshore oil and gas operators – the highest rate of any industry – means the Exchequer is already among the biggest beneficiaries. 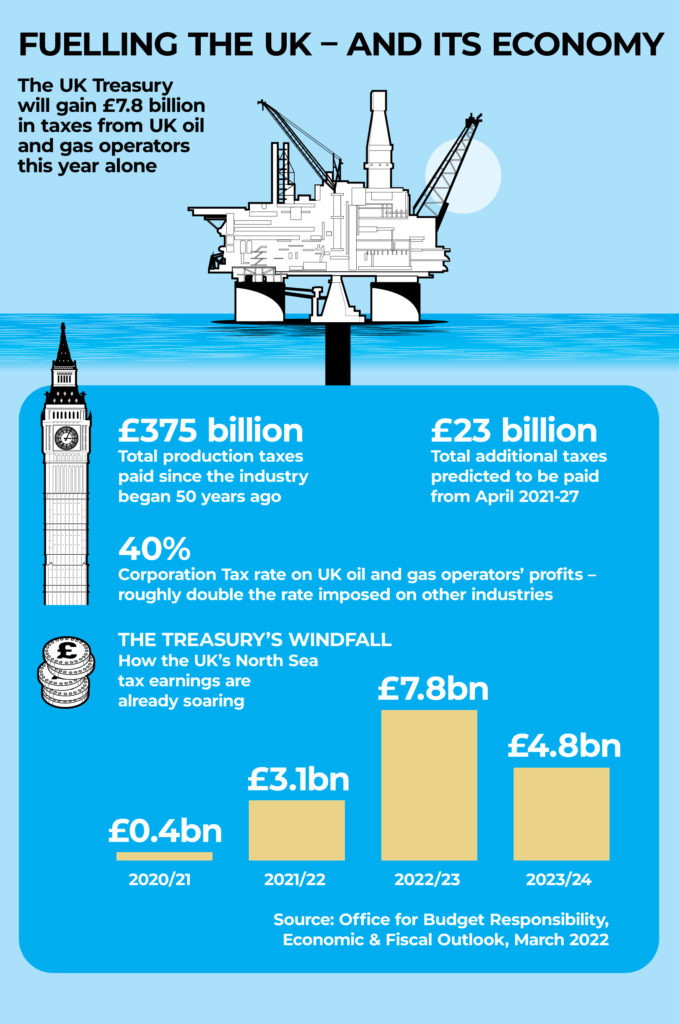 Sixth, a windfall tax is very difficult to deliver in practice.

If we believe that tax influences companies’ behaviour – on investment, on the way they organise their affairs and the way they choose to pay tax – then a new tax will change some of our basic assumptions. Jenny Stanning, the external relations director of Oil and Gas UK, warned:

‘In the longer-term a windfall tax would also be the worst thing for consumers because it would damage competitiveness and discourage energy companies from investing in the UK. That would reduce our energy security and make us even more dependent on imports from places like Russia and the Middle East’.

In other words, if investment stops, or goes elsewhere because of a windfall tax, we have to accept a risk to energy security and exposure to volatile global energy markets.

There is another practical difficulty: as most energy and fuel companies are global businesses, they do not always separate out North Sea profits from their international operations.

I do support a responsible and realistic approach.

I believe there is a problem that companies need to recognise they are a part of the communities they serve and making record profits, off record prices at a time when people are struggling to pay the bills is not acceptable.

That said, it is not clear that Labour’s “one size fits all” windfall tax proposal  would even provide a solution to the current challenge, for the reasons given. Indeed there are real concerns that a windfall tax could drive energy bills even higher, particularly in the long term.

As the Chancellor said:

“[Conservatives] don’t believe windfall taxes are the simple answer to every problem. But we are pragmatic. We want to see energy companies – who have made extraordinary profits from a time of acutely elevated prices – investing those profits back into British jobs, growth and energy security. And if that doesn’t happen – soon, and at scale, no option is off the table.”

We know what is driving up the cost of living. Since the second half of last year, as economies gradually reopened after  Covid-19, the demand for energy and pandemic related supply chain issues have driven wholesale oil and gas prices up around the world. Putin’s invasion of Ukraine has accelerated the increase in world-wide energy prices to their current record levels.

Although the UK is not as dependent on Russian gas and oil as our neighbours in Europe the invasion of Ukraine, along with the volatility of global energy markets, demonstrates the urgency of securing our energy supplies. That means diversifying away from oil and gas that is often supplied by other potentially unstable regimes (many of whom also have horrific human rights records).

North Sea oil and gas and, crucially, renewables (such as BP’s proposed off-shore windfarm off the coast of North Wales) is the key to bringing down energy prices and to decarbonising our economy in the long term.

This “pivot” towards domestic self-sufficiency requires significant investment by the UK government and energy companies. That is jeopardised by short-term tax changes, which those companies would see as greater risk for themselves, possibly disincentivising the investment we need them to make. It is vital to note, however, that the Chancellor of the Exchequer has been clear – if the investment in jobs and energy infrastructure and generation capacity is not sufficient then “no option is off the table.” So while I share the Government’s view that a windfall tax is the wrong option at this time, I also share the view that this position will change if investment is not committed at adequate levels.

And the government is helping already.

Just as the UK Government supported jobs, incomes and businesses during the pandemic, the UK Government is already providing substantial support to households as we face unprecedented increases in global energy prices. The Government has announced £9.1 billion worth of new measures to help families with the price of their energy bills by: