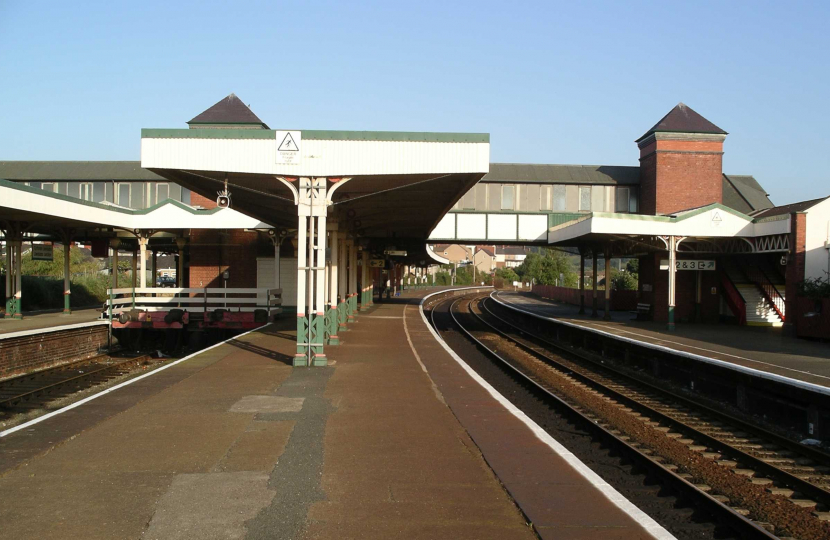 I am deeply concerned about the damage and disruption that the week of planned RMT workers rail strikes will cause.

These strikes are inconsiderate – those striking are already some of the best paid in the public sector. But those affected are already feeling the greatest pressure from the rising cost of living. Also affected are young people in the middle of their exams, tourists visiting on holiday and the businesses trying to serve them.

These strikes are cynical – they are politically motivated, fuelled by outdated grievances, coming at a time of record investment in rail and after unprecedented support during the pandemic. Rail stands at the threshold to a new golden era – but the unions want to drag it backwards.

These strikes are short sighted – at such a critical time, recovering from a pandemic, this risks a loss of public confidence in rail services which will only hurt rail workers themselves.

When the pandemic struck, the UK entered the worst recession in three centuries and passenger numbers collapsed. The Government recognised the value of the railways and responded with a package of support to railways and workers worth £16 billion pounds to ensure that they could continue to operate.

The UK government funded by British people stepped in and not one railway worker was furloughed or lost their job.

These strikes hit those hardest who are already feeling it most.

Our nurses, carers, teachers, cleaners, shop workers and factory workers – so many of whom depend on public transport – are also the ones who are feeling cost of living price rises the most.

Their inability to get to work will cause deep distress and risks hardship.

The railway strikes are the wrong thing at the wrong time, a relic of a bygone age – a stone age tool in a modern age.

The fact is that although this a dispute about wages, it is being brought by one of the better paid parts of the public sector. The average salary of those going on strike is £43,747.

These strikes will only deter visitors and damage our economy.

Here in Aberconwy and north Wales, tourism is invaluable to our local economy and rail connectivity is vital to bringing visitors. International visitors landing in Manchester and Birmingham airports, and UK visitors coming from key areas like the northwest and west midlands, all use rail to connect to north Wales.

The Welsh Affairs Committee in Parliament is currently undertaking an inquiry into ‘Wales as a global visitor destination’. Only last week, the CEOs of some of the most successful and high-profile visitor attractions in Wales highlighted the damage the strikes will inflict:

“There will be problems, and it won’t look good on us”

“It’s obviously not a good situation to be in.”

“People will not come back if they have a bad experience. They’ll think twice and there are plenty of other places they can go to see and do things.”

These strikes will deter tour companies who next year will choose more stable services. And tourists – who will simply choose more reliable destinations.

The education of our children and young people does not need further disruption – especially in the middle of exams.

Over the last two years, children and young people have already endured significant disruption. The strikes are happening at the peak of the school exam season and many children, especially children from poorer households who do not have access to alternative transport, must now manage the anxiety of how they will sit their exams – results that will stick with them throughout life.

Perhaps of all the reasons I have highlighted, I cannot support the Union leaders in calling strikes that have been timed to inflict maximum disruption on our children’s futures.

The railways should be showing their relevance to us, not power over us.

The strikes will bring disruption and distress – but to a world that is rapidly changing around the railways.

If disruption and upset is the aim of the RMT union then certainly, they will inflict enormous inconvenience and distress on workers, businesses, families and more – the same ones who have already endured so much over the last two years.

If ransom is the aim of the unions, then they need to realise that shutting down the railways will no longer paralyse our economy.

Our society and our economy is going through a transformation, one accelerated by the pandemic. Railways are no longer competing with other forms of transport – they must also find space alongside Zoom, Teams and remote working. They must demonstrate their ability to serve new patterns of work-life balance. Rail is increasingly a choice not a necessity, and these strikes threaten the competitiveness of their utility to customers.

At a time when lower carbon emissions are critical and the future modes of transport are being shaped, a new golden era for rail beckons – but only if investors can be convinced that they are reliable and can deliver in the future.

The only people the unions are hurting in the long term, is their own members.

Our railways have done great service to our nation and have been at the heart of our Great British story. They can be great again.

Railway workers here in Aberconwy and throughout the UK help keep the country going. They did it in the industrial revolution. They did it through the war. They did it again in the pandemic. They keep freight moving and ensure there is food on our shelves. They take people to work, children to school, families to their loved ones and tourists to the many beautiful and interesting parts of our country.

These are essential services; invaluable to our society and to our economy.

I want our railways to thrive once again and this government’s investment plans are the greatest program of rail investment in decades. But our railways face significant challenges. Passenger numbers have not recovered pre-pandemic levels. Ticket sales remain 25% lower than 2019 and the evidence is that travel habits have changed significantly.