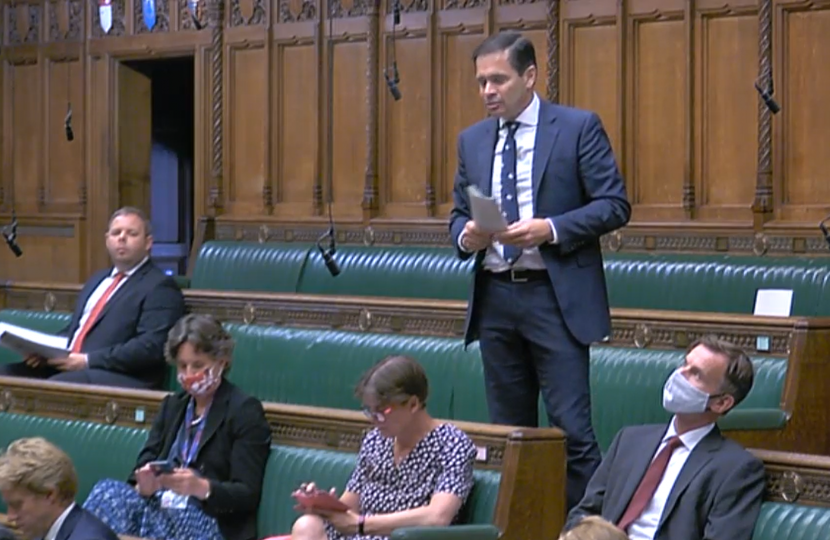 Robin spoke in this debate and in order that his contribution can be contextualised the Minister – Brandon Lewis’ opening remarks have been reproduced in full.

Opening remarks of the:

The Secretary of State for Northern Ireland

With permission, Mr Speaker, I will make a statement on the Government’s approach to the Northern Ireland protocol. The statement is being made simultaneously in the other place by my noble Friend Lord Frost, Minister of State at the Cabinet Office.

The Northern Ireland protocol was designed to achieve a delicate balance between a number of different aims. It reflected a truly extraordinary compromise by the Government in 2019, driven by our steadfast commitment to the Belfast/Good Friday agreement in all its dimensions. Just over a year later we concluded the trade and co-operation agreement, the broadest and most far-reaching agreement of its kind that has ever been struck. Together, these offered the building blocks of a strong, constructive partnership between the UK and the EU as sovereign equals. However, we have not yet been able to unlock the potential of that new partnership in full.

The impact of the current protocol is at the heart of that. There is no doubt that we have tried to operate the protocol in good faith. We worked throughout 2020 to finalise the areas left open by the protocol text itself—without, of course, knowing what the real-world impacts on the ground would be, as is the case with negotiations. We are planning already to invest, and are in the process of investing about £500 million in delivering systems and support service. We have worked with businesses to help their preparations for the new trading arrangements.

But as we have sought to operate the protocol, it is clear that its burdens have been the source of considerable and ongoing disruption to lives and livelihoods. We have seen reductions in supermarket product lines, we have seen more than 200 suppliers decide they will no longer sell to Northern Ireland, and we have seen difficulties not just on the famous chilled meats but on medicines, pets, movement of live animals, seeds and plants.

Nowhere is this more visible that in the fact that the Northern Ireland protocol means that Northern Ireland accounts for 20% of all EU documentary checks on products of animal origin, despite a population of only 1.8 million people. What is worse, these burdens will get worse, not improve over time, as the grace periods expire, leaving businesses facing ever more unsustainable burdens.

These impacts risk being felt in the fabric of our Union, too. All dimensions of the Belfast/Good Friday agreement need to be respected, Northern Ireland’s integral place in our United Kingdom just as much as the north-south dimension, yet there is a growing sense in Northern Ireland that we have not found this balance. That is seen in a difficult ongoing political climate, in protests and regrettable instances of disorder, and in strains within a power-sharing Executive already dealing with an unprecedented pandemic.

We have worked with the EU to try to address these challenges. Some avenues for progress have been identified in certain areas, but overall these discussions have not got to the heart of the problem. Put simply, we cannot go on as we are. We have therefore had to consider all our options. In particular, we have looked carefully at the safeguards provided by article 16 of the protocol. They exist to deal with significant societal and economic

difficulties, as well as trade diversion, and there has been significant disruption to east-west trade, a significant increase in trade on the island of Ireland as companies change supply chains, and considerable disruption to everyday life.

There has also been societal instability, seen most regrettably in the disorder across Northern Ireland at Easter. Indeed, what could be seen as a false but raw perception in the Unionist community of separation from the rest of the United Kingdom has had profound political consequences.

These are very serious effects, which have put people, businesses and the institutions of the Belfast/Good Friday agreement under strain. It is plainly clear that the circumstances exist to justify the use of article 16. Nevertheless, we have concluded that this is not the right moment to do so. Instead, we see an opportunity to proceed differently, to find a new path and to seek to agree with the EU, through negotiations, a new balance in our arrangements covering Northern Ireland, to the benefit of all.

It is in that spirit that today’s Command Paper outlines the new balance we wish to find. It is a balance that needs to ensure goods can circulate much more freely within the UK customs territory, while ensuring that full processes are applied to goods destined for the EU. It is a balance that needs to enable all in Northern Ireland to continue to have normal access to goods from the rest of the UK by allowing goods meeting both UK and EU standards to circulate. And it is a balance that needs to normalise the basis of the protocol’s governance, so that the relationship between us and the EU is no longer policed by the EU institutions and the Court of Justice. We should return to a normal treaty framework, similar to other international agreements, that is more conducive to the sense of genuine and equitable partnership that we seek.

We also recognise our share of responsibility in helping the EU protect its single market. We are willing to explore exceptional arrangements on data sharing and co-operation, and penalties in legislation to deter those looking to move non-compliant products from Northern Ireland to Ireland.

I repeat that all of this is entirely consistent with maintaining an open border, without infrastructure or checks, between Ireland and Northern Ireland. These proposals will require significant change to the Northern Ireland protocol, and we do not shy away from that. We believe such change is necessary to deal with the situation we now face. We look to open a discussion on these proposals urgently. At the same time, we must provide certainty and stability for businesses as we do so, so we believe we should also quickly agree a standstill period, including maintaining the operation of the grace periods that are in force and freezing existing legal actions and processes, to ensure there is room to negotiate and to provide a genuine signal of good intent on finding ways forward.

The difficulties that we have in operating the Northern Ireland protocol are now the main obstacle to building a relationship with the EU that reflects our strong common interests and values. Instead of that, we are seeing a relationship that has been punctuated with legal challenges and characterised by disagreement and mistrust. We do not want that pattern to be set, not least because it does not support stability in Northern Ireland. It is now time to work to establish a new balance

in which both the UK and the EU can invest to provide a platform for peace and prosperity in Northern Ireland and allow us to set out on a new path of partnership with the EU. We have today set out an approach that we believe can do just that. We urge the EU to look at it with fresh eyes and work with us to seize this opportunity and put our relations on a better footing. We stand ready to deliver the brighter future that is within reach. I commend this statement to the House.

Robin’s remarks in the House were made during the debate and you can view his contribution and the Ministers response by clicking on the link at the end of this piece.

I welcome the Command Paper and this statement as a timely and pragmatic response, but can my right hon. Friend confirm that he sees the integrity of the UK as the foundation for our pursuit of opportunities and for a peaceful and prosperous future?

My hon. Friend’s comment is absolutely spot on. The Command Paper is clear that we seek an agreed new balance to meet the commitments in the protocol in a way that fully respects Northern Ireland’s place in the UK market. Obviously, we understand that we have a duty to help maintain the integrity of the EU market, and we take that seriously. We think we can deliver on that, but we also have to be clear about the fundamental integrity of the UK market.