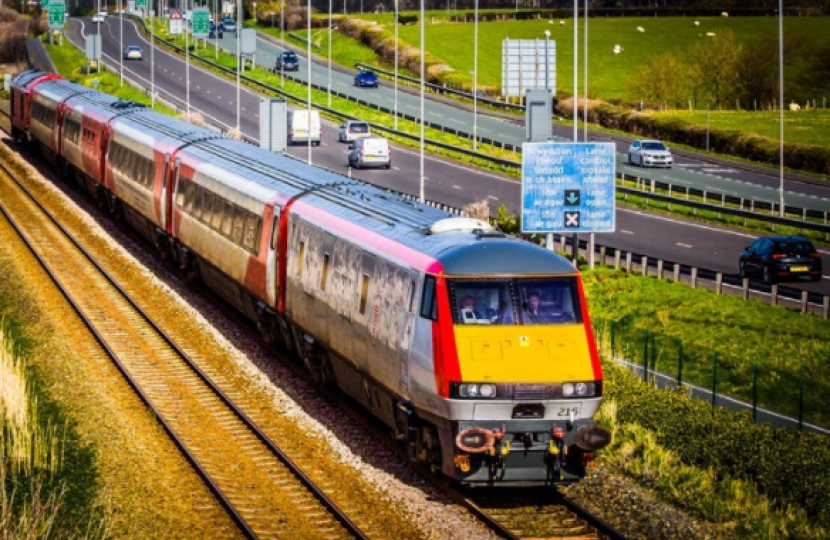 It had been feared that direct rail services between North Wales and Manchester would be lost following a review, that commenced earlier this year, by the Manchester Recovery Taskforce.

In a letter to North Wales Coast Line route MPs Chris Heaton-Harris MP, Minister of State for Transport, stated that “I recognise fully that, prior to Covid, passengers across the region did not receive the reliable service they require, and the Taskforce’s proposed changes ensure that as passengers return, the services are restored in a more reliable way.” Continuing, he said “the new timetable structure will see direct Manchester Airport connectivity for Liverpool, Chester and North Wales retained.”

Welcoming this announcement Robin said “retaining direct rail services with Manchester Airport is of huge importance to our local economy here in Aberconwy. In 2019, the airport welcomed over 520,000 tourists destined for Snowdonia and to other destinations in North Wales and 22% of them used rail services upon landing. In the same year, 899,000 passengers from across North Wales departed from Manchester Airport. Just 7% accessed the airport by rail and, as we seek to reduce transport emissions, we must be doing all that we can to make public transport as convenient, reliable and comfortable as possible.”

Continuing, Robin said “the service also connects much of the North West of England, including central Manchester, Runcorn, Warrington and Chester with North Wales. It is an invaluable link for countless families and for thousands of students and it is a vital service for tourists.”

The Taskforce, made up of Northern, TransPennine Express, Department for Transport, Transport for the North, Transport for Greater Manchester and Network Rail, took on board feedback from the public and stakeholders across the North, including North Wales, earlier this year and has acted on this feedback, adapting proposals to develop a new and high performing timetable.

In March, Robin, along with other North Wales MPs, made a detailed submission to the Taskforce public consultation that supported the option to retain direct rail access to Manchester Airport from North Wales.

This year is the 100th anniversary of the Royal British Legion and marks 100 years since our collective remembrance traditions were first brought together.