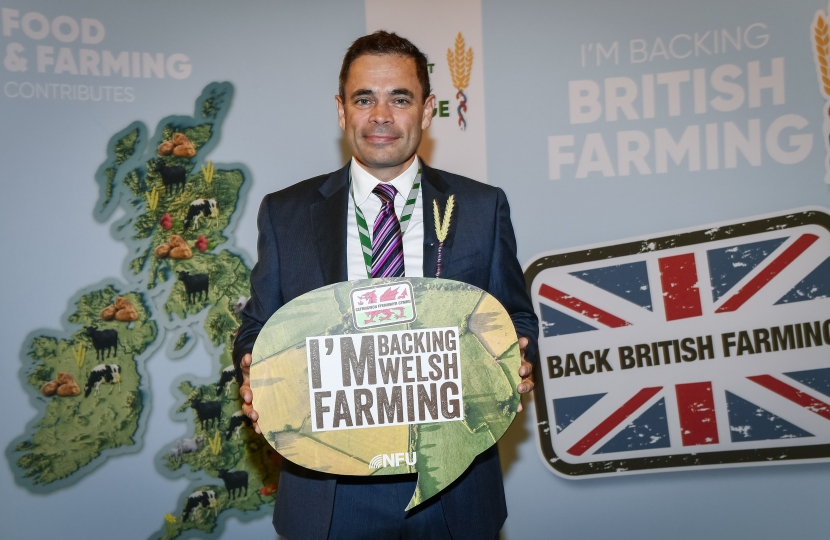 Robin Millar, Member of Parliament for Aberconwy, has used a debate in Parliament to mark Back British Farming Day as an opportunity to pay tribute to our local farmers and to thank them for all that they have done throughout the pandemic and for their invaluable contribution in protecting our environment.

Speaking in the debate, Robin said:

“I pay tribute to Aberconwy’s farming community. The last 18 months have presented farmers throughout the UK with unprecedented challenges. It is impossible to forget the scenes from the early days of the pandemic, when supermarket shelves were empty and people feared they were going to run out of food. However, farmers rose to the challenge, food was produced, demand was met and our shelves were restocked. I would like to take the opportunity to thank our farmers for all they have done in those difficult times. Diolch yn fawr iawn i chi gyd.”

“as has been recognised this morning, farming has been criticised as a major contributor to climate change. These attacks are grossly unjustified, as British farming practices are not only sustainable, but play a key role in addressing the climate change challenge. British beef and lamb farming are among the most efficient and sustainable in the world due to their extensive grass-based systems. We know that agriculture accounts for just 10% of UK greenhouse gas emissions, but actively managed pastures and grasslands, such as in Dyffryn Conwy, are hugely effective carbon sinks, with several studies finding that grassland could be a more reliable carbon sink even than woodland.

I remind those who love our landscapes and those summer staycationers who have been exploring Eryri, our national park of Snowdonia, that the spectacular scenery they are enjoying is the product of the hard work of our farmers. It is an industrial landscape, and our farmers are the custodians of it from Llanfairfechan to Ysbyty Ifan.”

NFU Cymry welcomed Robin’s contribution to the debate and support for farmers, Tweeting: “Couldn’t have put it better ourselves @RobinMillarMP. Thanks for your support.”