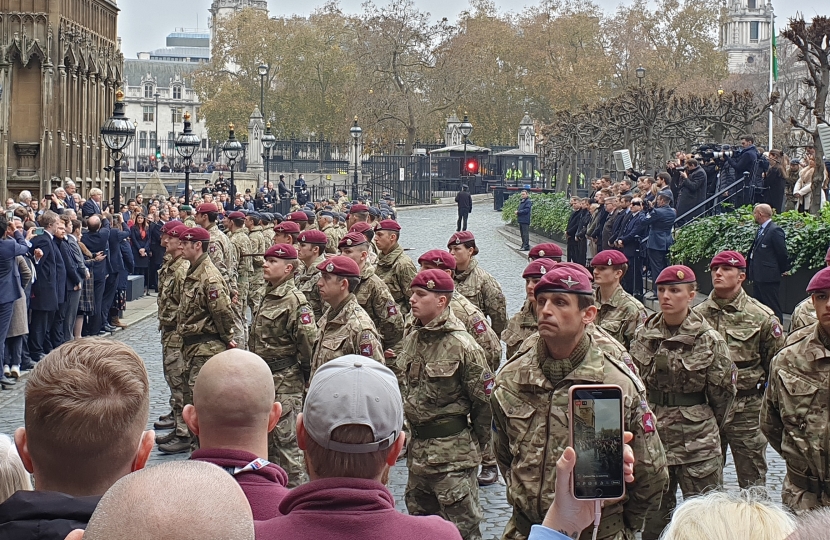 This afternoon 120 soldiers who have recently returned from Operation Pitting – the evacuation of Afghanistan – marched into Parliament accompanied by the Band of the RAF Regiment.

The Prime Minister thanked them for the service and paid tribute to their courage, professionalism and compassion saying “despite all the complexities and challenges that you faced you helped to evacuate 15,000 people, many of whom were seeing their darkest fears realised, with compassion and kindness. Your endeavours in Kabul will be recorded as one of our finest and most remarkable military accomplishments of the post-War era.”

It was a pleasure to attend the parade and the reception the soldiers received from assembled MPs, Lords, House of Commons and House of Lords staff and the many other guests is testament to the esteem with which the men and woman of our Armed Forces are held.

Afterwards I had the chance to talk with one of the Royal Marines who provided support to the operation - collecting and analysing intelligence on movements.

It was incredible to hear how just a few years ago he was a civilian but decided to join the Armed Forces and has now saved lives and played a crucial part in an international operation.

It was a privilege to meet him and spend a few minutes hearing about his experiences at the sharp end of UK activity around the globe.