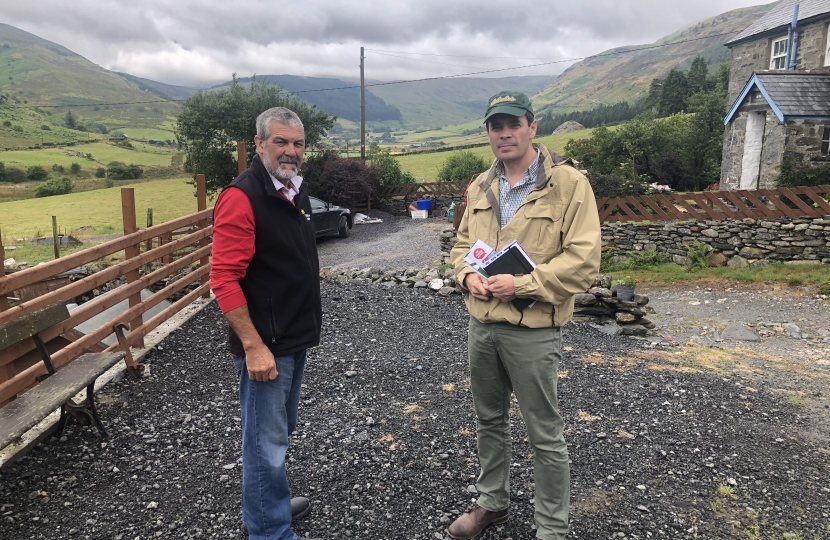 Parliament how now risen for the summer recess, and I am very pleased to be here in until Parliament returns on the 6th September when the normal routine of travelling down to Westminster will resume.

This summer, with the easing of the restrictions that we have endured for so long, I am going to be able to get out and about and to meet with as many residents, community groups and businesses as I can. I am particularly keen to learn more about the challenges that local businesses and communities face in recovering from the pandemic and about ways in which I, along with the UK Government, can further support them in the months and years ahead.

This week, in some exciting news for the United Kingdom as a whole, we learned that the UK economy is growing at a faster rate than at any point over the last 50 years. After all that we have endured over the last eighteen months it is fantastic to see vibrancy returning to our towns and villages. Whilst speaking to business owners around Conwy this week I was delighted to hear from many of them that things are really busy; “buzzing” being a frequently used word to describe the
atmosphere.

Again, in Llandudno, business owners are saying the same thing and it’s great to see the visitors returning and to see the coaches on the seafront again.

I know how hard businesses throughout Aberconwy have worked to ensure that their staff and customers are safe. After all the challenges that they have faced throughout the pandemic I wish them all the luck and success that they deserve.

In another exciting announcement we learned this week that the North West Wales Slate Landscape has been awarded UNESCO World Heritage Status. The UK Government has been involved in the
development of the nomination since the site was inscribed on the “tentative list” in 2010 with the Department for Culture, Media and Sport (DCMS) having responsibility for meeting the requirements of the World Heritage Convention within the United Kingdom.

Congratulations/ llongyfarchiadau, to the teams at DCMS, Gwynedd County Council and to everybody who has worked so hard to secure this week’s announcement. North West Wales was described as having ‘roofed the 19th-century world’ including Westminster Hall, Copenhagen City Hall and the Royal Exhibition Building in Melbourne.

Slate from the mines and quarries continues to have an influence on architecture around the world and given the immense importance of the site, it is fitting that the North West Wales Slate Landscape has been awarded this globally renowned and important accolade that places it on a par with the Taj Mahal, the Tower of London, the Great Wall
of China and the Grand Canyon.

There is a real “buzz,” too, about Team GB’s start at the Tokyo Olympics, our best ever start at the Olympic Games. I’d like to congratulate in particular Welsh swimmers Matthew Richards and Calum Jarvis who are the first athletes from Wales to win gold medals in the tournament. I’m sure Aberconwy is united in wishing the athletes of Team GB the best of luck for the remainder of the tournament – I am sure there will be many more medals.

You continue to keep me on my toes with your correspondence. This week many of you have written about the channel crossings that have been reported so widely in the media. You will not be surprised to know that you do not all share the same opinion on what we should do.

There have also been a broad selection of environmental issues that you have raised with me including better protection for grasslands, plastic waste and of course, the Big Green Week later on this year. We will return to this subject of the environment and COP26 in more depth
later on in the year.

However, now is time for a short pause. Mrs. Millar and I have a self catering holiday break booked and so next week we shall have the opportunity to slow down a little.

However, if you need any assistance or support or indeed would like my help with a community issue or project - please ‘phone or email my office. 01492 583094.

Robin.millar.mp@parliament.uk. I would be pleased to help you.