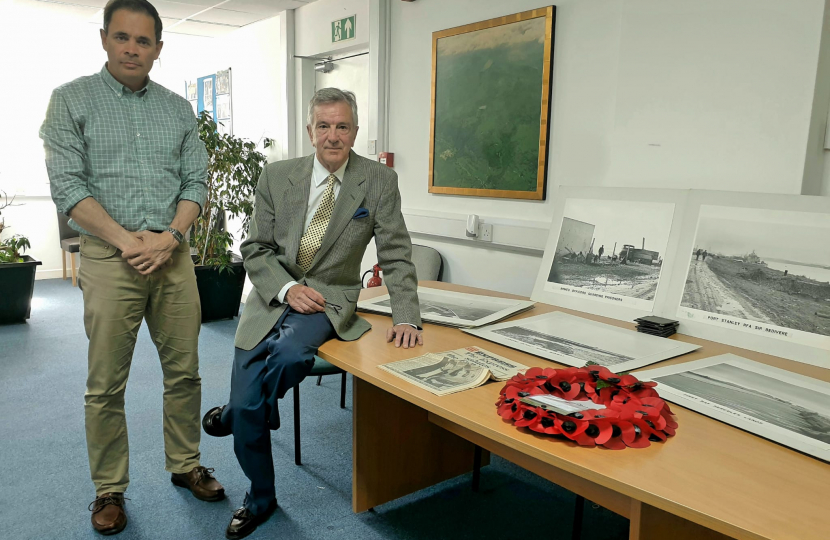 With local resident and Falklands Veteran  Squadron Leader John Griffiths, who kindly agreed to lay a wreath on my behalf at the Cenotaph in Llandudno.

Forty years ago today, following seventy-four days of Argentinian military occupation, the Union Flag was raised above Government House in Port Stanley and Major General Jeremy Moore of the Royal Marines announced to the world that the Falkland Islands were once again under the government of their choice.

It should never be forgotten that Argentina under General Galtieri’s military junta was a bastion of tyranny. Between 1976 and Galtieri’s downfall in 1983 which followed the military defeat to the British forces on the Falklands, the Argentinian military systematically crushed all political opposition, and murdered 30,000 people, almost all of them civilian, unarmed non-combatants. Campaigning for the "disappeared" continues today.

Today’s fortieth anniversary of the liberation of the Falkland Islands is an opportunity to remember all those who lost their lives in the conflict. It is also a time to pay tribute to the 255 UK servicemen who made the ultimate sacrifice so that the people of the Falkland Islands, their self-determination restored, could live in peace and in freedom.

And it is a fitting that we express our gratitude to all those servicemen who showed such resourcefulness and courage to recapture the Islands. They remind us all that freedom is only won, and peace is only maintained, by hard work and sacrifice. Simply, brave people were willing to journey to the other side of the world to lay their lives on the line.

It was on the 2nd April 1982 that Argentinian forces invaded the British Overseas Territory of the Falkland Islands. The United Kingdom’s military response was first military action since the Second World War that utilised all elements of the Armed Forces.

The British response was as swift as it was bold. It is also a response that is interwoven with local history and personal histories from here in Aberconwy. Within days the first ships had set sail towards the Falklands carrying 3 Commando Brigade Royal Marines along with 2nd and 3rd Battalions, the Parachute Regiment and other units including The Blues and Royals.

On 2 May 1982 the British task force reached the Falkland Islands. The RAF launched their opening attack on Port Stanley airport using Vulcan bombers. Known as the Black Buck Raids, they were the longest-ranged bombing raids in history at that time with some sorties flown by pilot Ken Walker of Glan Conwy. Casualties from both sides were to follow. On 4 May HMS Sheffield became the first British warship lost in action since World War 2 when she was hit by an Exocet missile, an attack that resulted in the deaths of 20 crew including David Osbourne of Old Colwyn.

On 12 May, the 5th Infantry Brigade, composed of Gurkhas and battalions from the Welsh and Scots Guards sailed to the Falklands aboard the requisitioned liner, the QE2. Amongst the troops on board were six sons of Llandudno who were serving with the Welsh Guards.

On 21 May, 3 Commando Brigade successfully executed landings in San Carlos Water. These landings were almost unopposed, but the Royal Navy continued to suffer from Argentine air attacks. Three Royal Navy ships, HMS Ardent, HMS Antelope and HMS Coventry, were sunk in the space of four days, with the loss of 42 crew members. Amongst those lost was 25-year-old Ray Roberts of Llanberis.

Attention then turned to Goose Green, where the first and longest land battle of the campaign was fought. During the 14-hour battle, British Paratroopers faced an entrenched Argentine army scattered across a nearly featureless and windswept terrain. Eighteen paras were killed, including Colonel ‘H’ Jones, who led the battalion and was posthumously awarded the Victoria Cross – the Armed Forces’ highest and most prestigious award for bravery.

One of the darkest days of the war came on Tuesday, June 8th. At Port Pleasant, Royal Fleet Auxiliary landing ships, Sir Galahad and Sir Tristram, were preparing to disembark soldiers from the Welsh Guards when attacked by three Argentine aircraft. The explosions and subsequent fire caused the deaths of 48 crew and soldiers including 32 Welsh Guardsmen. Gareth Hughes of Llanfairfechan was amongst the Guardsmen killed and many others were injured that fateful afternoon, including a number of the troops from Llandudno.

Following victory at Goose Green, British forces began their battle for Stanley, the island’s capital. On 11 June, a series of attacks were launched on the high ground to the west. The Welsh Guards and Royal Marines took Mount Harriet and Sapper Hill, while Mount Longdon and Two Sisters were captured from Argentine forces by the next morning. As part of the second phase of attacks, Mount Tumbledown, Mount William and Wireless Ridge were taken on the night of 13-14 June. With Stanley surrounded, Argentine forces surrendered, and the Royal Marines of 40 Commando raised the Union Flag on West Falkland. While the fighting was at an end, the work was not over. Local Welsh Guardsmen helped clear up enemy positions and further tragedy occurred in a ‘friendly fire’ incident at Stanley Airport.

Altogether, 30,000 sailors, marines, soldiers, airmen and merchant mariners took part in the Falklands War. 255 British personnel lost their lives. Seven ships were lost to enemy action and nine aircraft shot down. Three Falkland Islanders also died. Just under 780 British military personnel were wounded, with injuries ranging from minor shrapnel scratches, through disfiguring burns, to amputation and loss of limbs. Even those who were not wounded physically found that they had changed on their return home. Many had severe symptoms of Post-Traumatic Stress Disorder; most had disturbed dreams.

The success of the operation to recapture the Falkland Islands required almost unimaginable levels of courage and tenacity. It depended equally on the training, discipline and engineering, logistical and intelligence expertise for which the UK Armed Forces are renowned around the world.

I am proud to be a member of the Armed Forces Parliamentary Scheme and am privileged to have visited UK military sites, and to meet with Armed Forces personnel, throughout the UK and occasionally overseas. These visits and meetings have been invaluable in helping me, along with other Members of Parliament, understand how we can better support our Armed Forces in Parliament and we have seen that the brave men and women of our Armed Forces have lost none of the professionalism, skill and determination that facilitated the historic victory 40 years ago. I look forward to continuing to do all that I can to support the military community, both serving and retired, here in Aberconwy and throughout the UK.

Thank you to Adrian Hughes of Llandudno's Home Front Museum for providing much of the local historical research for this article. 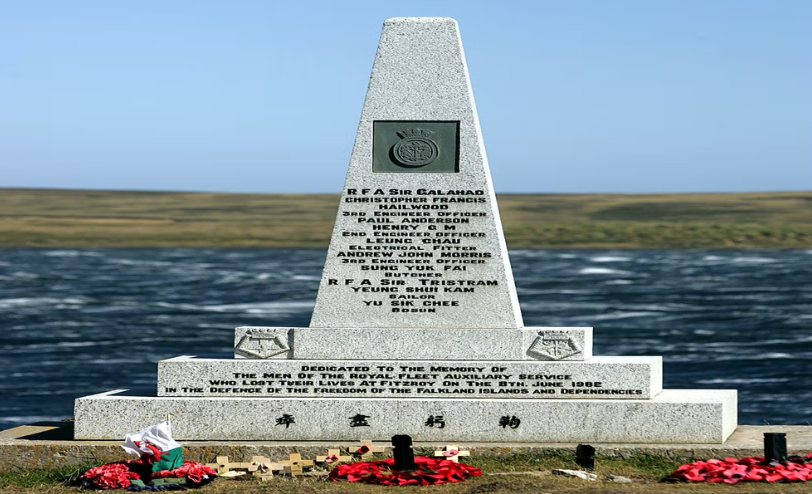